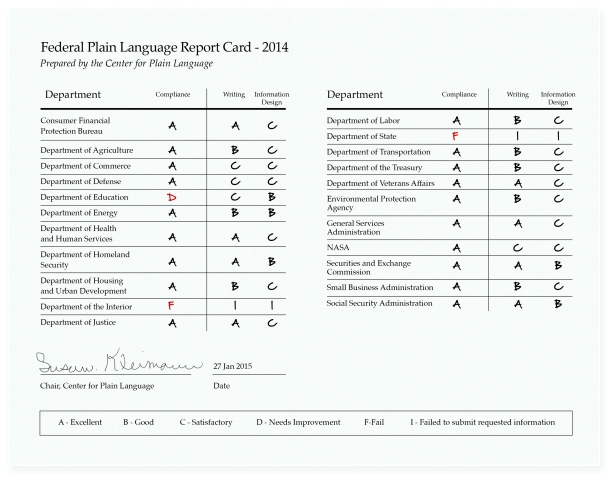 In their white paper, they note that the quality of writing within the US federal government is improving.

• 16 out of 22 departments improved over last year’s grades.

• Many agencies also improved their Writing and Information Design scores, demonstrating commitment to the spirit of the Act, as well.

Perhaps the best sign of changing culture within these federal agencies is that many now test their documents.

Social Security, HUD and several other departments reported that they evaluate comprehension by observing and interviewing readers while they read and use plain language content. Other departments, such as VA, used remote methods, including comprehension surveys, to evaluate the documents they submitted. Still others described evaluated success by statistically contrasting peoples’ likelihood to respond appropriately before and after communications were written in plain language.

When writing is treated as a genuine attempt to communicate, we all win. Thanks to those at the Center for Plain Language who do the research required to complete these report cards.